My family and I made our annual trip to Arizona at the beginning of March, and as usual, we had to go to a few games. Of course, March in Arizona means Spring Training, and I'll post on that later, but it is also during hockey season.

My wife and I made it to two Arizona Coyotes game, and after the second one, we stayed afterward to get a few autographs. The Coyotes beat the Calgary Flames 2-0, with both Jakob Chychrun and Clayton Keller scoring and Darcy Kuemper posting the shutout. Coyotes fans were also happy to see Flames goaltender Mike Smith get scored on, as they still haven't forgotten some of the comments he made about the team after being traded from the Coyotes in 2017.

We waited at the normal graphing spot right outside the exit of the underground parking garage, hoping that a good game would put the players in a good enough mood to stop and sign autographs on their way out of the arena. It would indeed be a good night, as five of them stopped and I was able to add a few great items to my collection.

Most of what I got were pucks. There were maybe 10 of us fans waiting, so there wasn't a whole lot of time to find out who a player is and dig out specific cards or photos, so pucks are always an easy way to go. The one exception would be for Alex Galchenyuk, who has a card each in two of the sets I am working on (2013-14 Score and 2014-15 Ultra), so I made sure to get those cards ready along with the puck. He was happy to sign all three items, and even asked if I wanted him to put his Canadiens number on the cards instead of his Coyotes number, since that is the team he is depicted on. 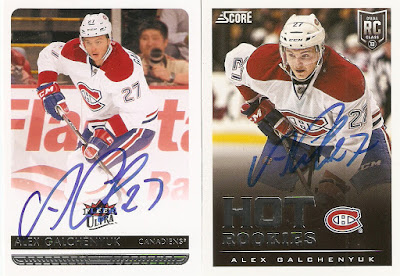 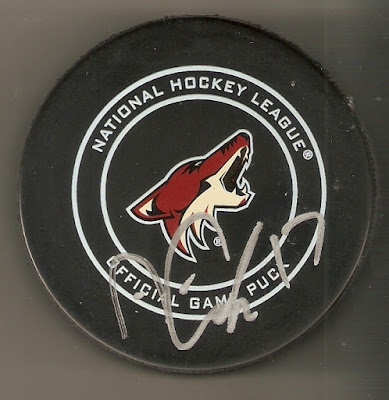 I always appreciate players taking the time to stop for us, as they have spent a full day at the arena and are probably eager to get home. There are always a few regular players who will stop after almost every game, but there is still enough variety each day, combined with a little bit of turnover every year, and I have managed to put together a good variety of players, with Jakob Chychrun being the only one of the five that night who had signed for me before. In addition to him, I was also able to get pucks signed by Christian Dvorak, Nicklas Hjalmarsson, and Jason Demers 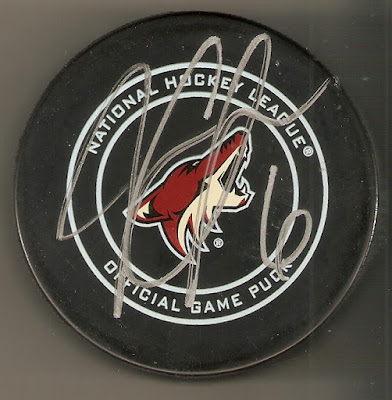 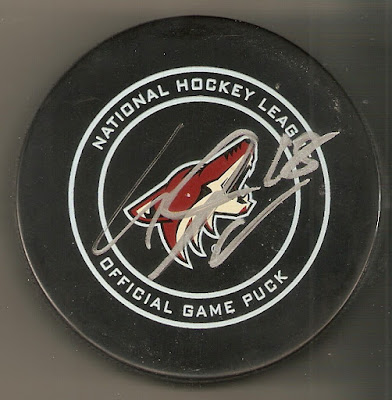 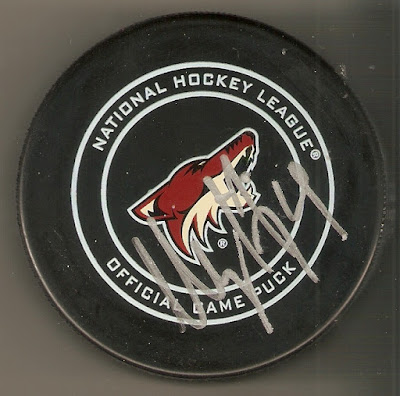 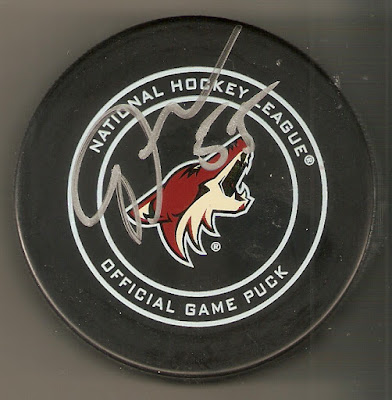 Even without the autographs, I always have a great time at Coyotes games. The only drawback this time was that it seems like the ushers are more stringent about checking tickets for the lower-level seats. Our previous strategy about moving down from the cheap seats to the lower level may have to be revised before next year's games.
Posted by Matt Pederson at 7:06 PM