I just had one TTM return last week. This one came from former Dodgers outfielder Ralph Bryant and took 28 days to and from a home address. 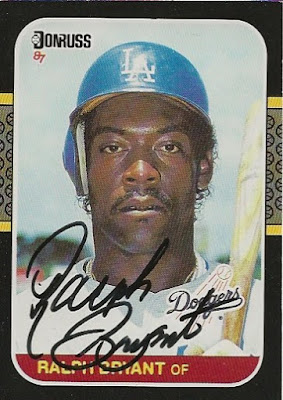 Posted by Matt Pederson at 10:25 AM No comments: 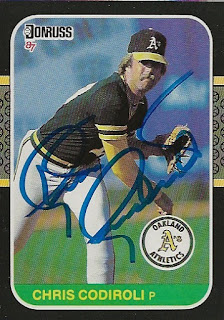 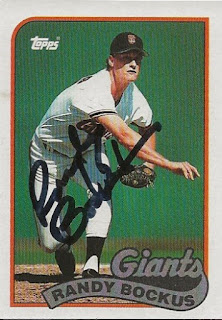 Posted by Matt Pederson at 8:24 AM No comments:

A few months ago, I had the opportunity to take part in a private signing with former Chicago Bulls guard Craig Hodges.

I may not be the biggest basketball collector, but I had the chance to get a jersey of his at a great price, so I figured this would be a good chance to get a great-looking new addition to my expanding autographed jersey collection.

This is my first signed basketball jersey, though, and I must say, it looks great! The colors really pop as it is, with the bright red jersey, combined with the black numbers. I had him sign it in silver with a "91-92 NBA Champs" inscription to signify the two titles he won as a member of the Bulls. I like the idea of separating the inscription and number when they have a double-digit number. It just doesn't make sense to me to fill one number with ink and leave the other one blank. 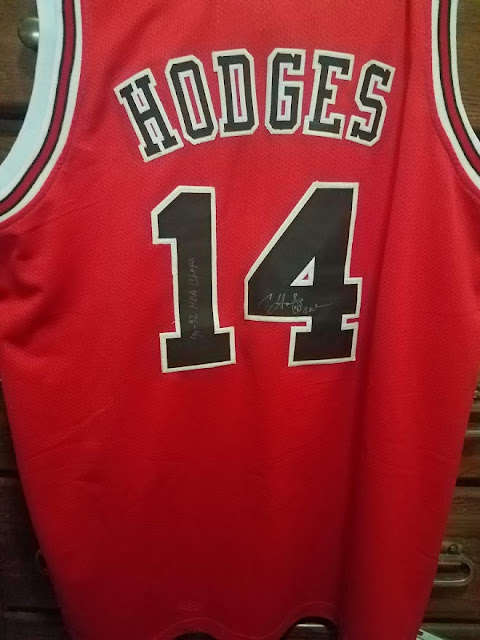 I also added a card to this signing. The 90-91 Fleer set is the first that I bought regularly in the short time I was collecting basketball cards. It's not an overly complicated design, which is good, because the signature will stand out even more. I'm not sure if I will end up pursuing a basketball set, but if I do, it will be this one. 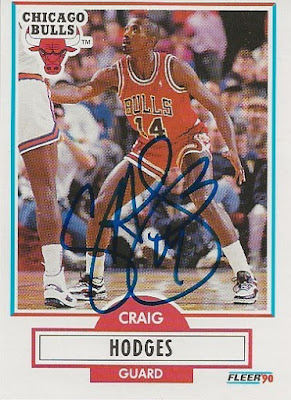 Posted by Matt Pederson at 10:52 AM No comments: 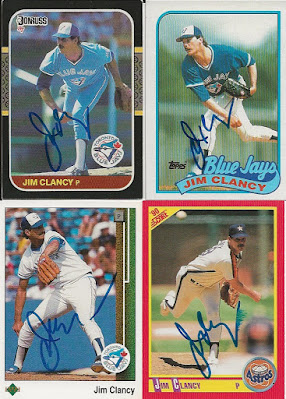 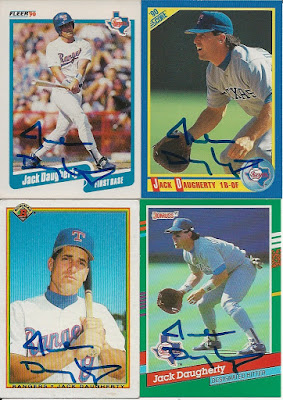 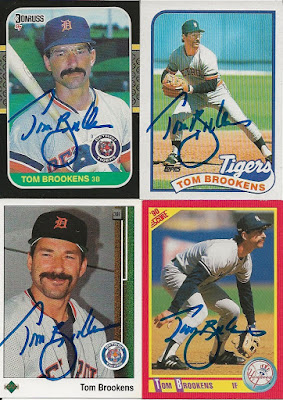 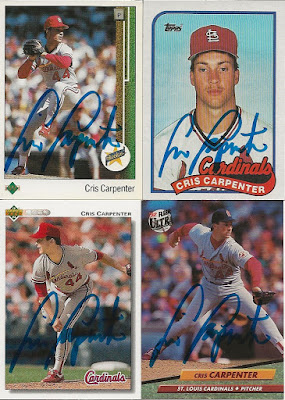 Posted by Matt Pederson at 6:12 AM No comments:

I got a nice surprise a couple months ago, when a good friend of mine who puts together private signings with former pro athletes announced he would be doing one with former Chicago Cubs pitcher Mark Prior.
Being as big of a Cubs fan as I am, I had to take part in this one, as Prior was a huge part of am incredible starting rotation for the team in the early/mid 2000s. He came into the league as one of the most prized prospects of the time period. Unfortunately, elbow problems would derail his career, and he would never live up to the potential that he came into the league with. He did make the All-Star team in 2003, and pitched seven scoreless innings in the ill-fated Game 6 of the 2003 NLCS before things started to unravel in an epic fashion one out into the 8th. He never made it to the World Series as a plyer, but did get a championship ring in 2020 as the pitching coach for the Los Angeles Dodgers.
While I usually don't go too overboard with these, I made an exception with Prior and went all-in. Part of it was supporting a friend's business, and part of it was just that I wanted all this stuff anyway.
The main item the I wanted was a jersey. if nothing else, I was going to get that much at least. I found a good deal on Ebay, and had him sign the second 2 with a bold silver paint pen. The signature takes up almost the entire width of the number, which is great, and really stands out. The signature can be seen well from a distance, which is what you want with something like this. I really needed a Cubs jersey to add to my jersey wall, and this is a perfect addition 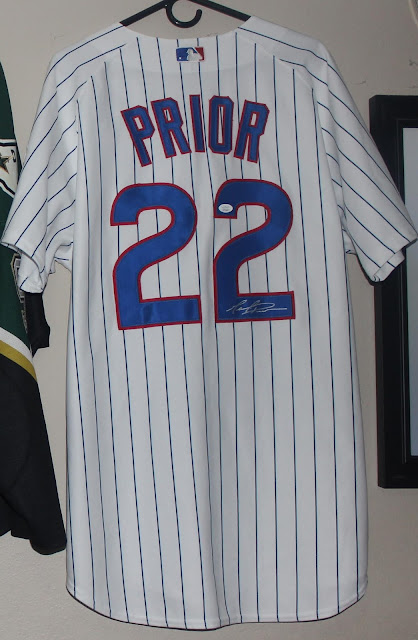 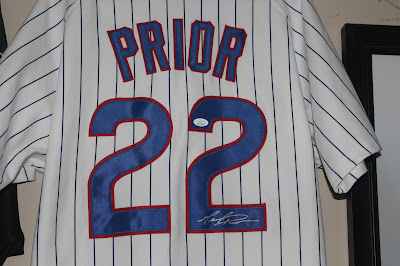 Of course, to go along with the jersey, I had to get a ball done. I thought about an inscription, but couldn't come up with a good one. Considering how much potential he had, notating just one All Star appearance, I felt, would understate how big of a deal he was at the time. I went with just the signature, which still looks great. 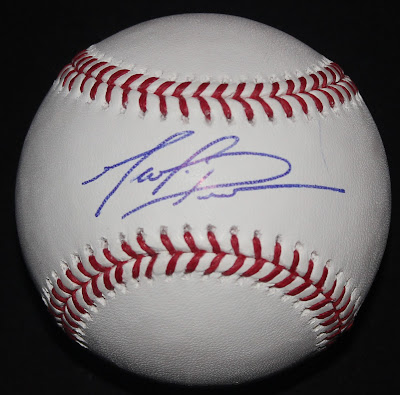 I also picked up a couple signed photos. There were three to pick from. I really liked a posed studio picture that was available, but I also wanted an action shot of him pitching. I couldn't decide between the two, so I got both. 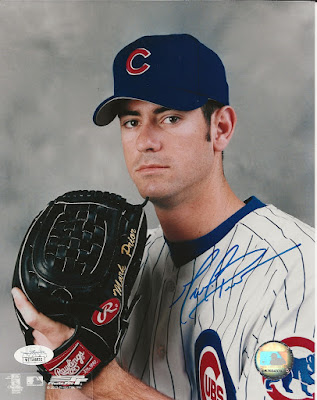 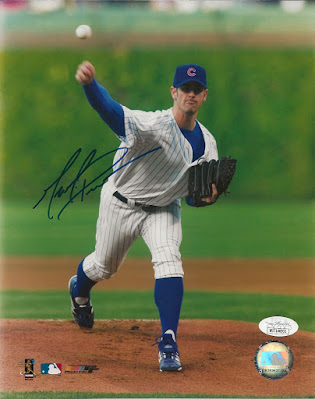 Lastly, I also got a couple cards done. I really like getting the artistic, painted cards done, and there have been a few great-looking releases recently. I probably should have gotten one of his 2006 Allen & Ginter cards, but by the time I decided to get a couple cards done, there wasn't enough time to order one that I could receive, and then ship off for the signing. Still the Topps 206 and Diamond Kings cards I got done look great! 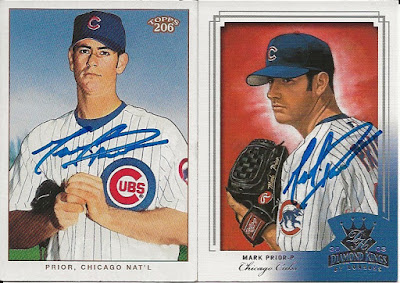 Well, that's it. I decided to stop at 6, because, you know, moderation. It's really great to add so many items of his to my collection, and here's a look at my updated jersey wall. 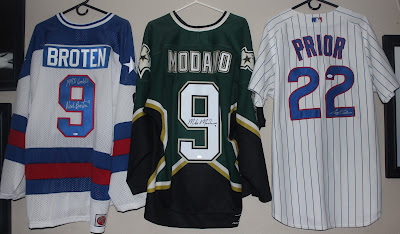 Posted by Matt Pederson at 11:39 AM No comments:

Private Signings for my 1989 Topps Set

While TTM has been the way to go for me in my set collecting goals, every now and then, I get an opportunity to get some cards signed from some tough-to-get signers. Of course, a lot of these instances happen through private signings. A good friend of mine put a couple together recently, that I was able to utilize for my 1989 Topps set, so I was sure to take advantage of it.

For Dave Magadan, I got my Topps card done, as well as one for my 1987 Donruss set. Also, since he spent a short time (1 season) with the Cubs, I had to also get a photo of him signed from that time period. 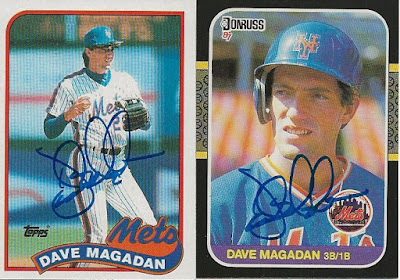 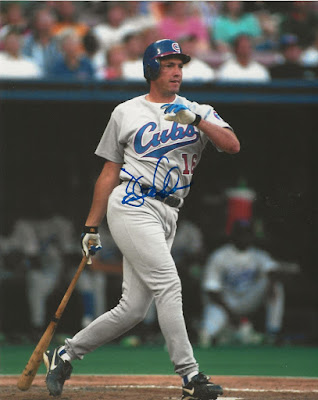 I also got a Topps card signed by former Mariners pitcher Mike Jackson. 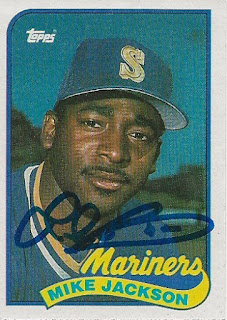 The Topps set is a long one, and one I will likely never complete, but it has so far been a fun project to work on. 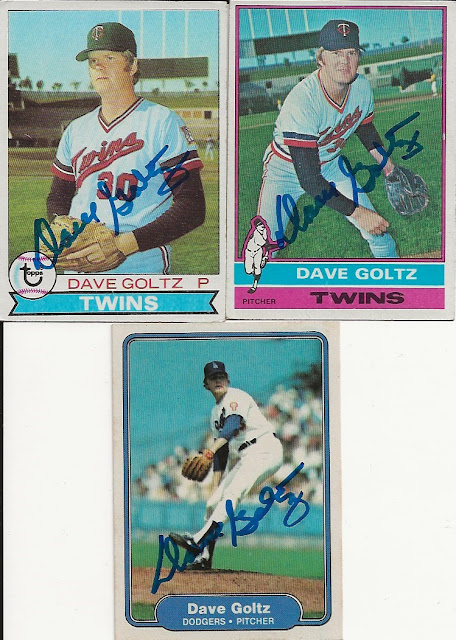 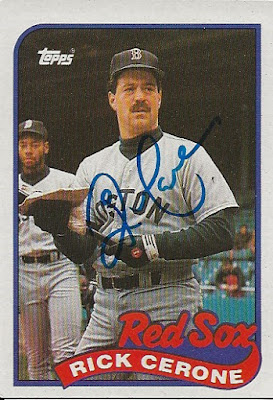 Posted by Matt Pederson at 9:23 AM No comments: