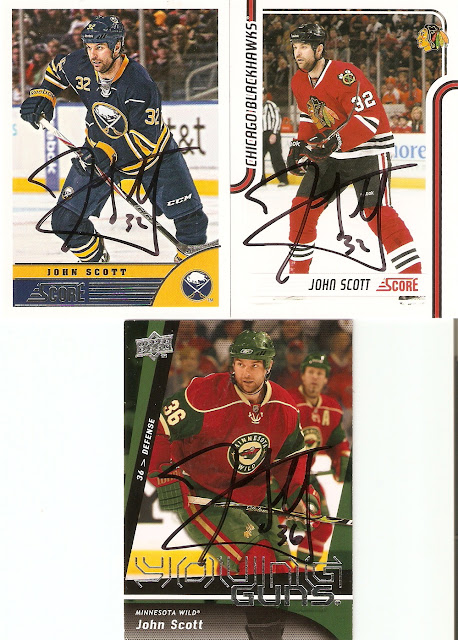 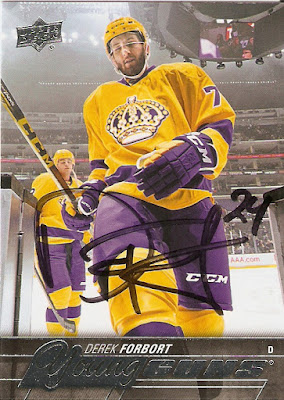 Posted by Matt Pederson at 9:11 AM No comments:

Here's the Minnesota Wild in-person event I had been waiting for the whole season! Ever since the Wild signed Eric Staal, I had been waiting for him to make an appearance at a public signing. I also had yet to make it to a Ryan Suter signing. The last one he did was two years ago, with Devan Dubnyk and Jonas Brodin. At the time, I could only afford one, and Dubnyk was new to the team, so I went with him, not knowing what his signing habits would be. Of course, Dubnyk has done two signings since then, in which I got an 8x10 photo last year, and a mini mask this year.

Anyway, as luck would have it, BOTH Staal and Suter were announced to be making a public signing appearance at FanHQ, which was all that I had hoped would happen.

Unfortunately, I was scheduled to work that day, and wouldn't be able to make it.

Luckily, FanHQ is great with mail orders, and has sign-and-ship options for pucks and 8x10s. Living 3.5-hours away, I can't make most signings in person, so the fact that they do mail-orders still allows me to participate, They always take great care of the products, and never send anything out of sub-par quality.

Anyway, I picked up an autographed Official Game Puck of each, and here they are: 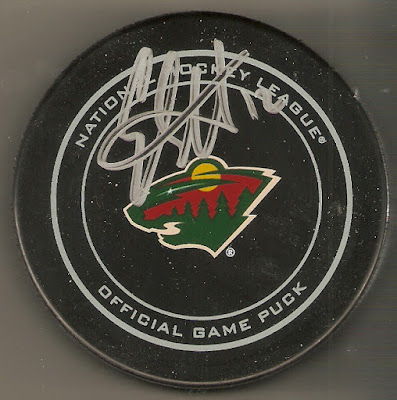 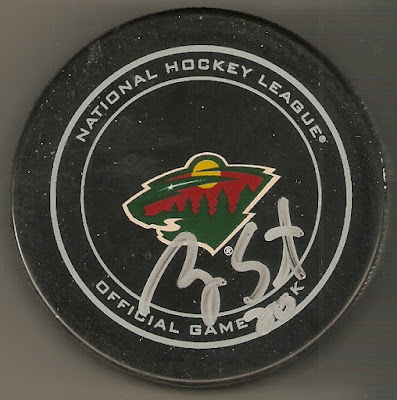 While I was unable to attend this one in person, I will be making the drive to the next one, featuring Mikko Koivu and Mikael Granlund. I'm really looking forward to meeting the Captain, and I need Granlund for a few sets that I'm working on. It should be a lot of fun!
Posted by Matt Pederson at 2:32 PM No comments:

I got just one TTM return this week, from former MLB pitcher Joe Hesketh. 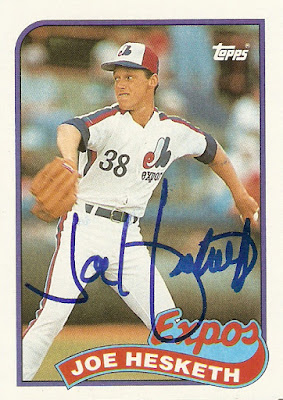 Posted by Matt Pederson at 11:09 AM No comments:

Anyway, the same guy who had the Fire Sale the last time I posted had another, with some older cards, which was perfect for me. I'm working on the 1990-91 Upper Deck set, and was able to pick up 11 cards to ad to the collection. Now, I already had Phil Bourque and Brent Hughes, but these were signed in blue, so I picked them up as better-looking replacements. The other 9 are brand new. 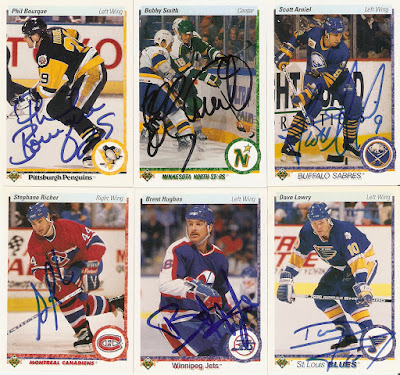 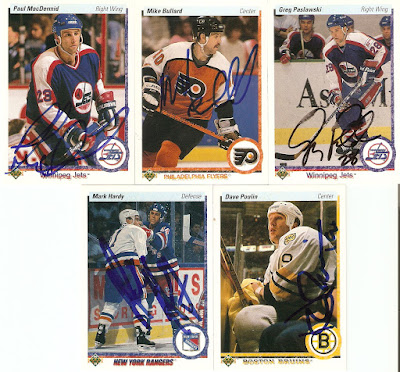 There were also two cards for the 2013-14 Score set that I'm working on, for only a couple bucks each. 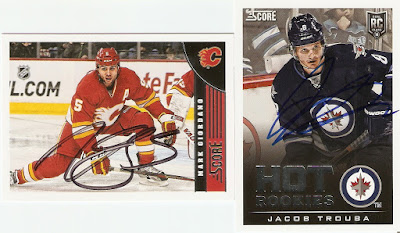 As a big Zach Parise fane, I was thrilled to see this one available, even if it is of him on the Devils, and not the Wild. I think this one was just $2! 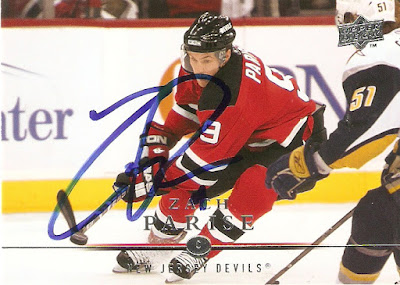 Here's a few cards from teams I like. Of course, there are a couple of Penguins, and some older ones, with Dave Burrows and Jean Pronovost. There's also some Minnesota hockey players, with Bobby Smith, Ryan Suter, and Christian Folin. 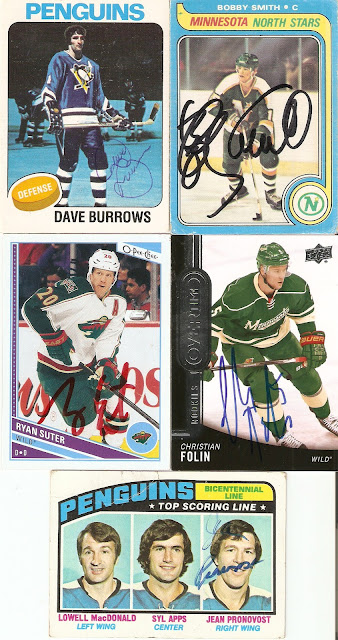 These are a few older cards that I like. Ken Morrow was part of the 1980 USA Olympic team, Aaron Broten grew up in Roseau, MN, and Sharlie Simmer was a pretty good player in his day. 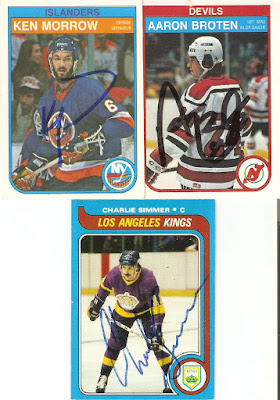 These don't really fit into any of my collections, but for some reason, I couldn't pass them up. Here was have Jordan Eberle, Tomas Plekanec (x2), Kari Lehtonen, Adam Henrique, Sean Burke, Alexei Yashin, Mark Letestu, Griffin Reinhart, and Mikael Backlund. 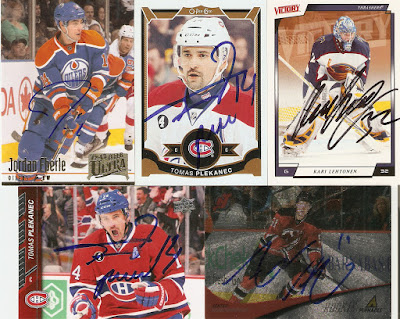 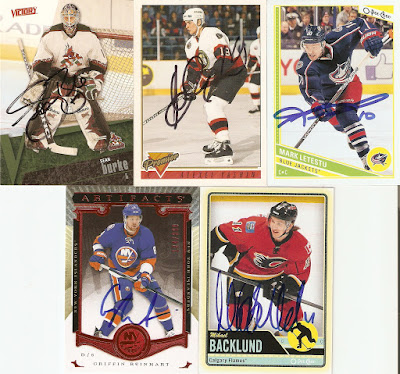 That's it for these, although I'm sure I'll have plenty more to show off before too long.
Posted by Matt Pederson at 5:27 PM No comments:

Here's a quick look at my TTM returns for the week ending February 6, 2017: 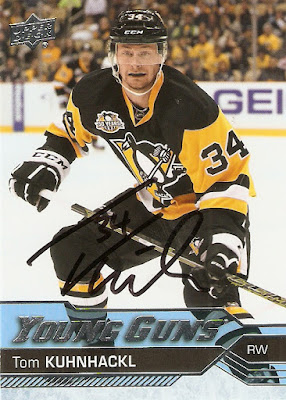 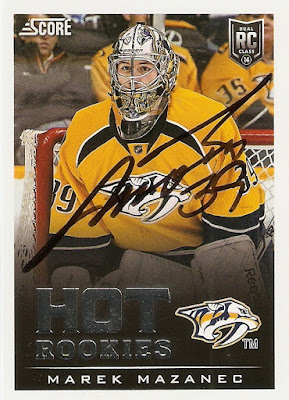 Posted by Matt Pederson at 12:44 PM No comments:

Here's a quick look at my TTM returns for the week ending February 4, 2017: 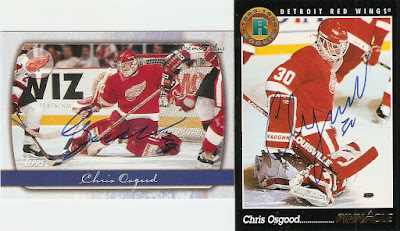 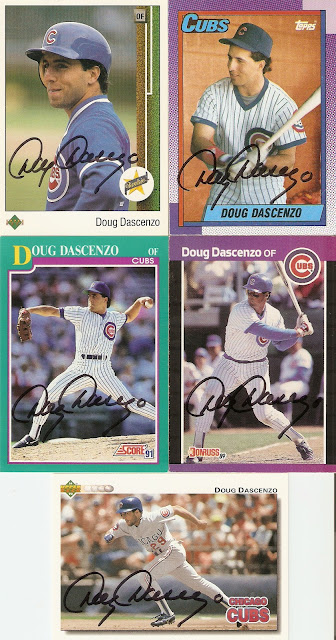 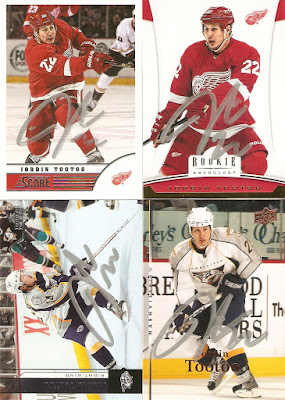 Posted by Matt Pederson at 9:00 PM No comments:

So, last year, there were a few changes made to the NHL All-Star Game. For one, the "game" would now be a short tournament between the four conferences. Two, the fan voting would determine the four team captains, instead of the starting lineup. Well, the NHL didn't for see the voting public trying to throw a wrench into the whole system, so they made every NHL player eligible for the four captaincies.

Well, as time went along, voters began getting behind Arizona Coyotes defenseman John Scott, who was an NHL journeyman known more for throwing punches than scoring goals. When began as a joke on the Marek Vs. Wyshynski podcast soon became a genuine effort to get one of the game's unappreciated players some recognition. Then the NHL stepped in.

According to an article Scott wrote for the Player's Tribune about the situation, an unnamed league official tried talking him out of it, as many in the hockey community considered his inclusion to be undeserved and a joke. Once the general public read this, they really rallied behind Scott, partly to stick it to the league, and partly because he is such a nice guy who they felt was being mistreated by the NHL.

To make matters more complicates, the Coyotes would trade Scott to the Montreal Canadiens. The conflict there was two-fold. For one, the Canadiens were in not only a different division, but a different conference, and two, they sent him down to their AHL affiliated, meaning the guy who the fans voted as team captain was no longer even on an NHL roster. Fans saw this as another effort to undermine Scott's inclusion, and rallied behind him even more, until eventually, the NHL decided that no matter where he plays, the fans' choice would be included in the game.

Despite all the controversy around it, Scott decided to make the most of it. He participated in the skills competition in both the fastest shot and shootout contests. The next day during the game, though, is when he really made his mark. Scott, who scored a total of 5 goals in his 7-year NHL career, actually scored two goals in the All-Star Game. His team, the Pacific Division, would win the tournament, and Scott would be named MVP, putting a perfect cap on an unlikely storybook ending.

Well, being the autograph collector that I am, I definitely need to add a few Scott items to my collection. Soon after the All-Star festivities, Scott signed an exclusive with Your Sports Memorabilia store for future signings. Now, their prices can be a bit expensive, but they do run various sales throughout the year. So, I waited...and waited...and waited for the right deal to come along. Finally, a year later, it happened, as they ran a sale last Friday, as the 2017 All-Star Weekend was kicking off. All All-Star items would be 50% off, so I immediately jumped on it, and added three new items to my collection.

Being a big puck collector, I knew I needed one. Specifically, I wanted an official puck for the All-Star Game. As luck would have it, one such item was available, and even better, it comes with the 2016 ASG inscription, which I really wanted. 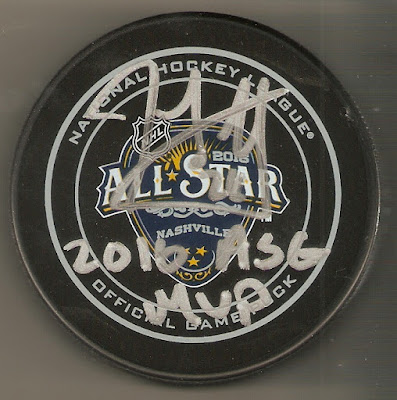 Secondly, I picked up an 8x10, signed in blue, of him celebrating his first goal of the night. No inscription on this one, but I feel like the image really speaks for itself, and much more than just his signature would clutter up what is already a beautiful image. 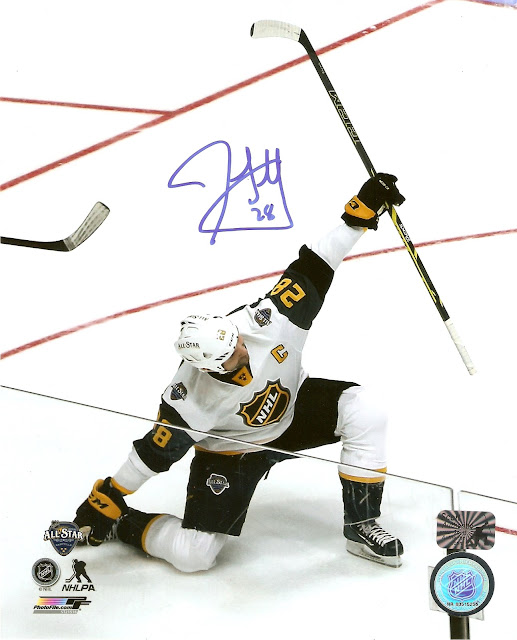 The puck and the photo were the two items I had wanted since day one, but I also pulled the trigger on an autographed mini helmet. What I like about this is that the signature and inscription are on the side, right next to the All-Star Game logo. So many of these mini helmets are signed right on the top, but the way I display them, the autograph is best visible on the side of the helmet. It was just perfect for me, so I had to pick this up, as well. 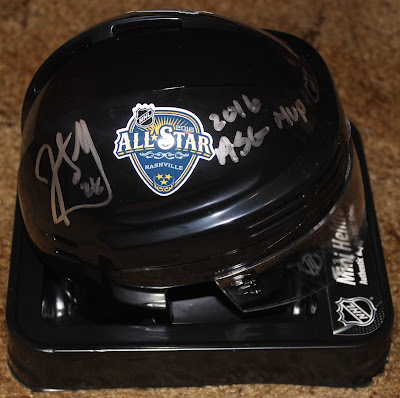 Since last year, the NHL has instituted what is being referred to as the "John Scott Rule," where players demoted to the AHL between Nov. 1 and Jan. 26 would be ineligible for the game. There would also be a list of players for the fans to vote on, instead of the free-for-all in 2016. Some fans decried this for tasking all of the fun out of it, and preventing another John Scott story from happening. That may be true, but what Scott did in 2016 was something different. They way it took off, combined with the league's meddling, along with Scott scoring twice, and winning MVP, was something special, and couldn't be replicated, no matter how much people can try.
Posted by Matt Pederson at 7:33 AM No comments: