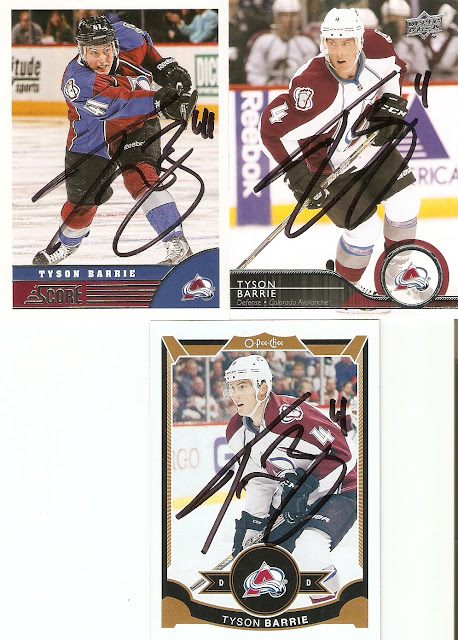 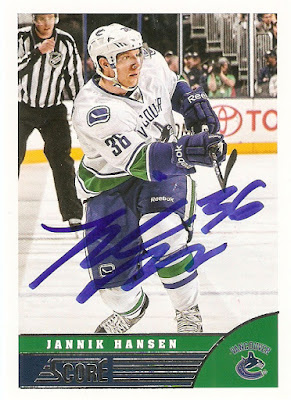 Posted by Matt Pederson at 11:12 PM No comments: 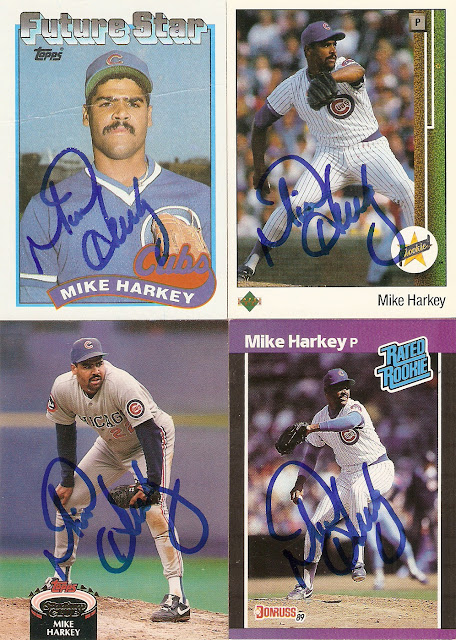 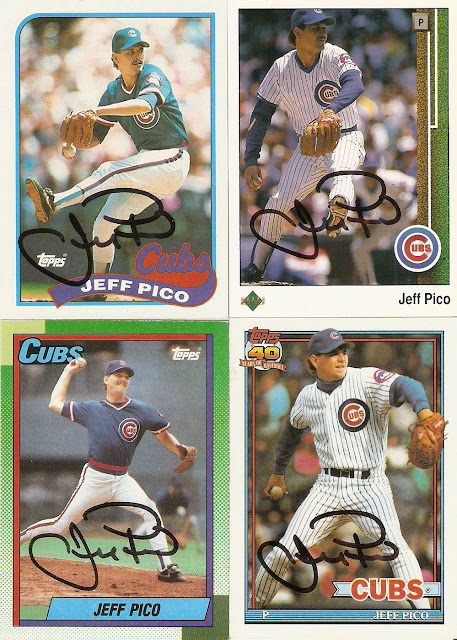 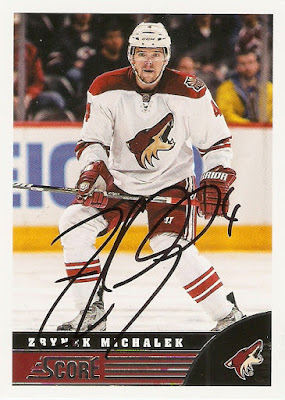 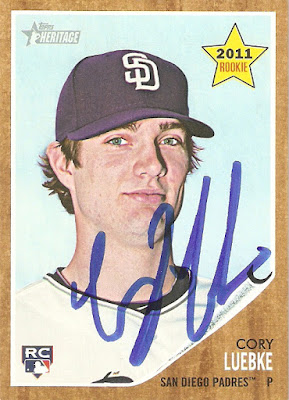 Posted by Matt Pederson at 10:21 AM No comments: 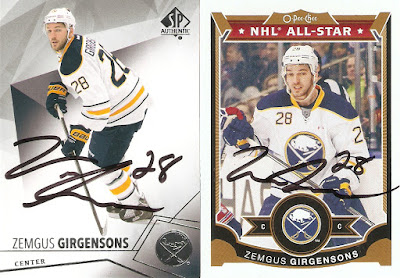 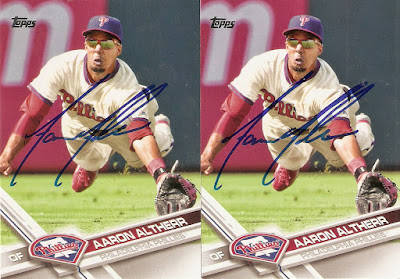 Posted by Matt Pederson at 9:01 PM No comments:

This was one of those.

The staff at FanHQ were hosting an incredibly rare signing with all 12 of the Minnesota-based members of the 1980 U.S. Olympic hockey team. Each of these players either grew up in, or played college hockey in, the "State of Hockey." The signing was announced a couple months ago, I immediately checked my work schedule to determine that I was off of work, and then the waiting game began. Finally, it came, and my wife and I made the trip to Minneapolis.

The signing was part of FanHQ's annual "Rock & Jock Expo," which combines sports memorabilia with a music sale, which includes TONS of classic vinyl. I went to the event two years ago, when six former Minnesota North Stars goaltenders were signing, but didn't make is last year when former Minnesota Vikings quarterback Daunte Culpepper was the featured guest.

There were plenty of items for sale to be signed, including a few custom canvas prints and pucks made specifically for this event. I came with my own, though, as I was able to add some names to my Miracle On Ice Celebration 16x20. I already had Neal Broten and Buzz Schneider from previous signings, so I was able to add 9 names to the project. For those of you doing the math, and noticing 2+9 does not equal 12, you're right. Unfortunately, Delta Airlines cancelled John Harrington's flight, and he was unable to make the signing, turning this into an 11-person event. In addition to Broten and Schneider, I was able to add Bill Baker, Dave Christian, Steve Christoff, Steve Janaszak, Rob McClanahan, Mark Pavelich, Mike Ramsey, Eric Strobel, and Phil Verchota. Harrington's appearance will be rescheduled, which means I will hopefully be making a trip back at some point soon to add one more. 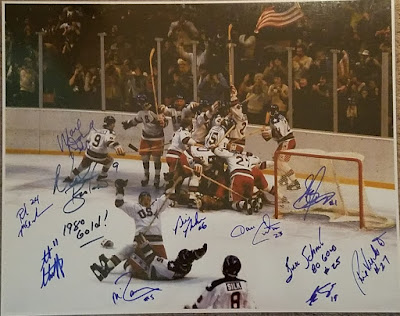 I bought the "super ticket," which includes one autograph of each at a discounted rate, which meant that I had tickets for Broten and Schneider that I didn't need. I traded in my Schneider for an extra Dave Christian. My dad said Christian was his favorite from the team, being the only University of North Dakota guy on Team USA, and he was thrilled when I surprised him with an autographed 8x10 from the former Sioux winger. I kept the Broten, though, upgraded it to a "deluxe" and got this jersey signed by him. I had wanted this item ever since I first saw him back in 2014. When I arrived at that one, they had already sold out of his USA jerseys, so I am happy to finally be adding this one to my collection, at long last. 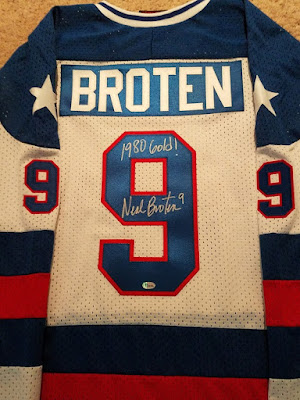 Lastly, I purchased an extra ticket for Mark Pavelich and had him sign an 8x10. The former center has become quite elusive, and is the toughest autograph to get from the team. In fact, there were quite a few people with items containing 19 signatures on it that just needed his. He is a very private guy, who turns away from any kind of spotlight, so I had to get an extra item of his, since there is a good chance I will never have another chance to do so. 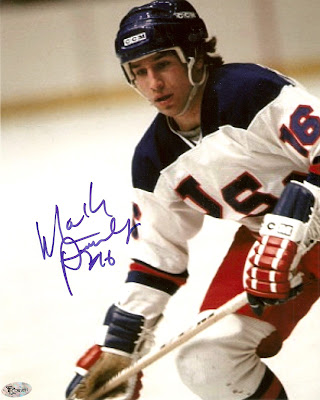 The weekend was definitely a fun one. the wife and I were able to spend the day with just the two of us, she got some shopping done, and I got some ink done (of the blue Sharpie variety). Of course, I love getting autographs whenever I can, but when I can get some from some people who were a part of the greatest moment in American sports history, it's always a great day.
Posted by Matt Pederson at 7:48 PM No comments: 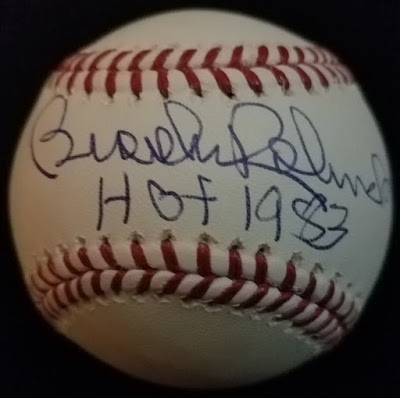 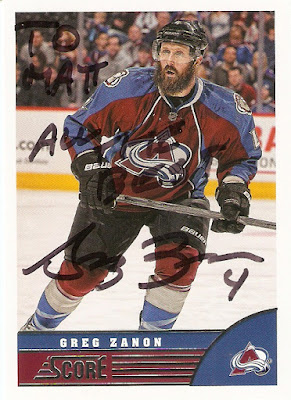 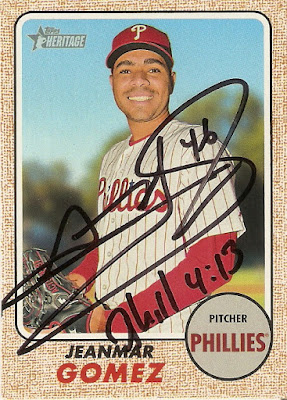 Posted by Matt Pederson at 3:01 PM No comments:

This one was a bit of a longshot, but I decided to take it and it paid off.

Eric Staal signed with the Minnesota Wild in the off-season, and has become a big part of one of the best seasons in franchise history. He is also in two of the autographed sets I am collecting: 2012-13 Score and 2014-15 Ultra. He actually did a public signing earlier this year, but unfortunately, I was working that night and had to miss it. Despite him not having a return recorded on sportscollectors.net since 2012 (apart from one success to a Canadian residential address), I decided to try my chances and send to him c/o the Wild.

Well, my luck was good, and I received all three cards back from him, signed in black, in just 63 days. 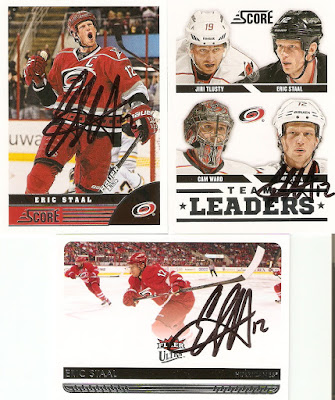 It just goes to show, sometimes it pays to just take a chance.
Posted by Matt Pederson at 7:53 PM 1 comment: