I went to my first baseball game of the season yesterday, as I saw our Fargo-Moorhead Redhawks take on the Gary-Southshore Railcats in American Association action. I took my three girls with (ages 8, 6, & 2), and while time was split between watching the game at our seats and watching them play at Newman Outdoor Field's playground, we all had a great time on a windy Sunday afternoon.

While I ALWAYS love being out at the ballpark, the game turned out to not be the best quality action, as the Redhawks lost 5-1. They were hitless through five innings, and finally picked up some hits late in the game, but it proved to be too late. Redhawks pitcher Tyler Herron, who had only allowed six runs in his previous eight starts, let all five by in this one.

After the game, my girls wanted to stop by the team shop, and truth be told, I did, too. They have all sorts of game-used goodies there, and I was curious to see what they had. As luck would have it, my timing was perfect, as I found an item that I had been waiting two year to get: A game-used home jersey from their 2015 season.

This one is of pitcher Brandon Mann, who played for the Redhawks that season. He went 7-10 with a 4.07 ERA. While those stats may not be too impressive on their own, he did have one that is. In 2015, Mann set an American Association single-season record with 157 strikeouts, and this is the very jersey that he set part of that record in! 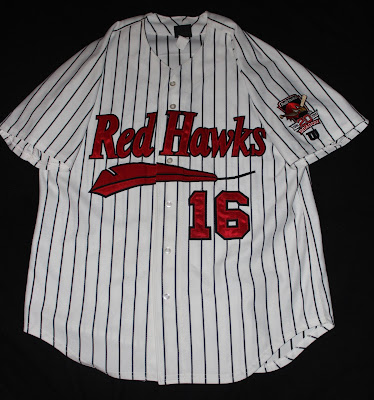 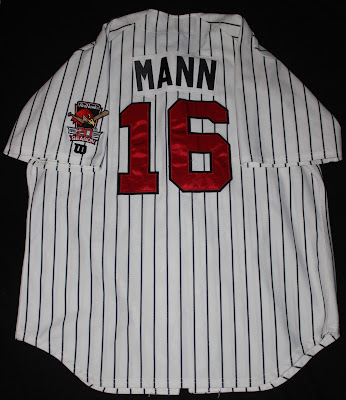 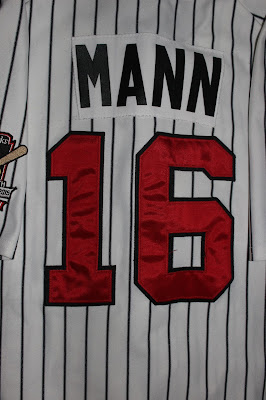 Of course, Mann's record-setting season is impressive, but what really drove me to this jersey was a patch. 2015 was the Redhawks' 20th anniversary, and throughout the season, players wore a special patch on the left shoulder to commemorate that achievement. While these kinds of patches can vary in their intricacy, this one is very detailed, and I remember thinking back then, that I had to eventually get one of these when they made it to the team store. 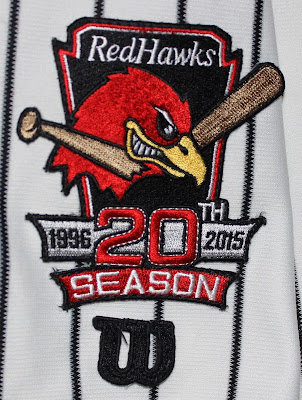 This year, the Redhawks made a change to their home jersey, and dropped the pinstripes, which I always love on a baseball uniform. Luckily for me, I was able to find this one-of-a-kind collectible with the pinstripes and a special patch, and from a record-breaking season. The stars don't always align in my favor, but in this case they did, and everything worked out just right
Posted by Matt Pederson at 7:39 PM 1 comment:

One of the very first things I did after the Pittsburgh Penguins won the 2017 Stanley Cup was go on-line and place my order for all sorts of championship gear. I ended up finding a hat, two t-shirts, and a beer bottle koozie before heading to NHL Shop's Clearance section and finding an item for my autograph collection. 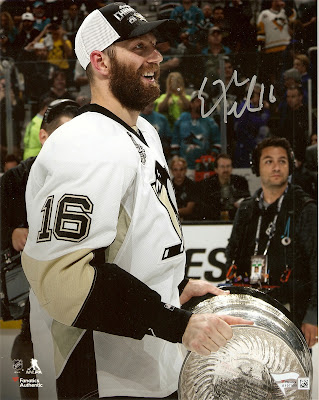 Unlike the other items I picked up, this one is from their 2016 Stanley Cup victory and is a Cup celepration 8x10 of Eric Fehr. The photo is signed in silver and looks amazing, as the signature really pops out. His time in Pittsburgh may have only been a season and a half long, but his role in a Stanley Cup victory makes him a Penguin for life, as far as I am concerned.
Posted by Matt Pederson at 10:36 PM No comments:

Some Father's Day Ink From My Girls

I had a GREAT Father's Day yesterday.

I spent the early part of the afternoon with my dad, as my wife, my girls, and I went to my parents' house for lunch. My brother, my cousin, my aunt, and my grandmother were there, as well, and it was great to have some family time (and to watch the Twins game on TV). Afterwards, we came back home and my girls gave me some gifts.

Now, I'm not one who feels an absolute need for surprise gifts. For my birthday, for example, I'd rather my wife just let me order the Center Ice package on DirecTV than to gift me with something that I may or may not like as much. I like the simplicity of it.

This Father's Day, though, they did surprise me with a gift that was just perfect for this autograph collector: a Fargo Force hockey jersey signed by the entire 2016-17 team! 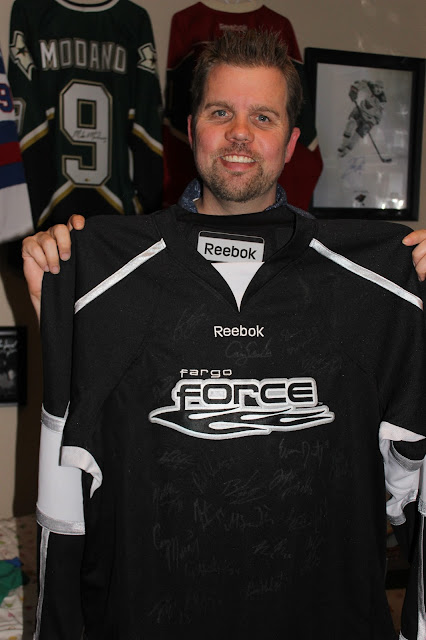 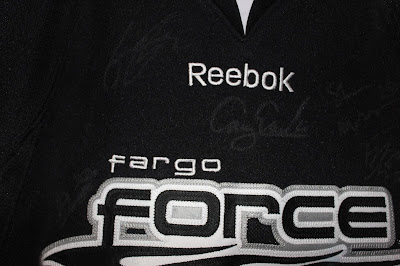 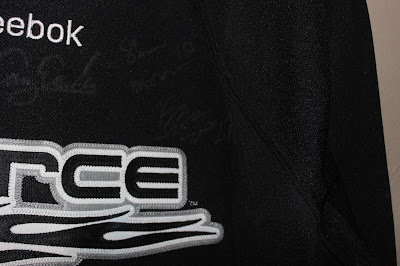 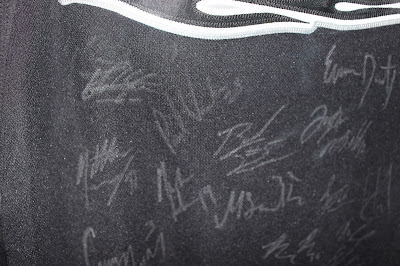 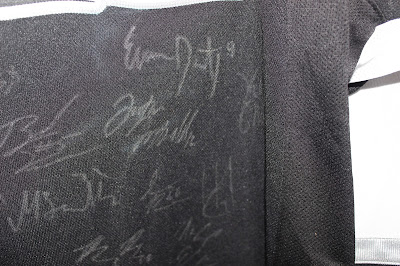 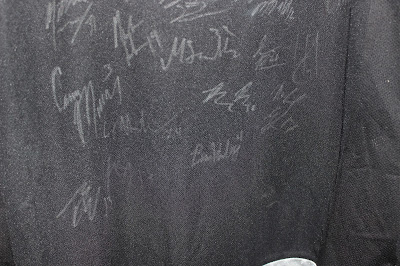 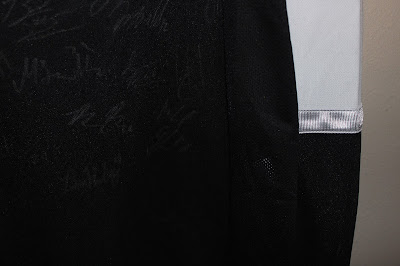 (Some pictures showed the autographs better than others, but you get the idea.)

The jersey was  purchased at a silent auction held at my oldest daughter's school, and my wife got a GREAT deal on it. I guess there wasn't a whole lot of other bidding, as she ended up winning it for, basically, half of what an unsigned jersey would cost at the team store.  Now the only question is if I wear it to a game next season, or just leave it proudly displayed on the wall of my man cave. 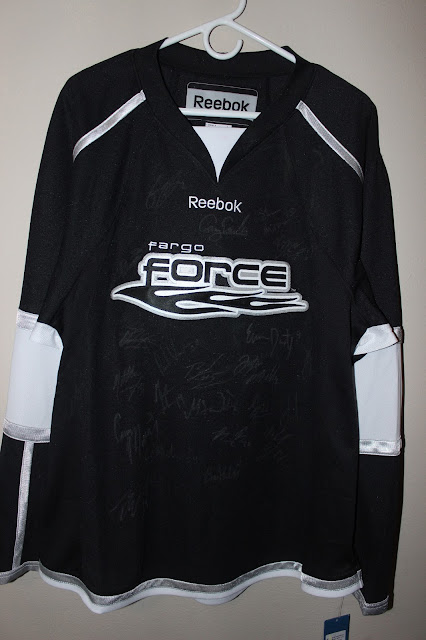 Posted by Matt Pederson at 6:27 PM No comments: 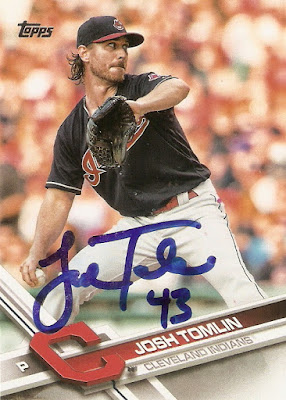 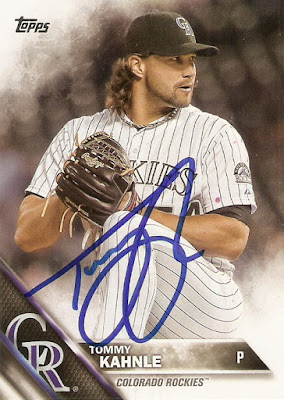 Posted by Matt Pederson at 6:29 PM No comments: