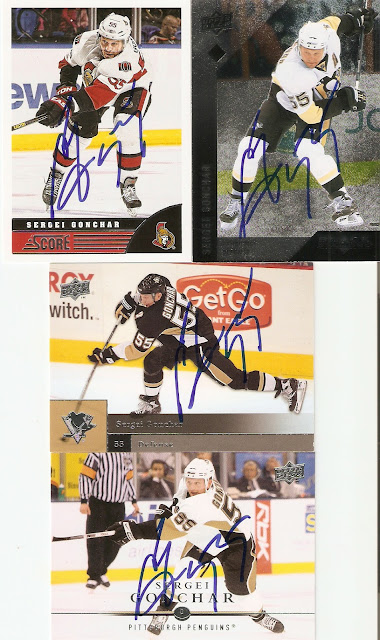 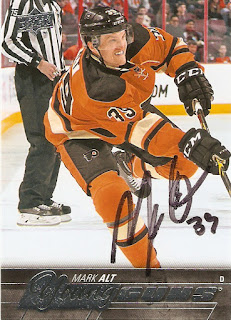 Posted by Matt Pederson at 8:10 PM No comments:

AME Sports recently held an autograph signing with Charlie Coyle and Marco Scandella of the Minnesota Wild. I was fortunate enough to be in the Twin Cities for the Neal Broten & Buzz Scneider signing a couple of weeks ago, but this one, I would have to sit out. Still, I never have to miss out completely, as AME is great with mail orders, so I was able to participate that way.

I have become a huge fan of Coyle from watching the Wild the last few years, and think he has the potential to become a major player in the NHL. I don't think he gets quite a lot of recognition across the league, but in the "State of Hockey," he has become a fan favorite, not only because of how good he is on the ice, but also because of how great he is with the fans.

I got two 8x10s of Coyle. One is taken from a moment during pre-game warmups a few years ago, when he waved hello to a young fan. The video of this, and the fan's reaction went viral, so I really wanted to get a photo of that moment signed. I asked fr gold ink, because I thought it would stand out better than blue or black, and it sometimes does, depending on how the light is hitting it. 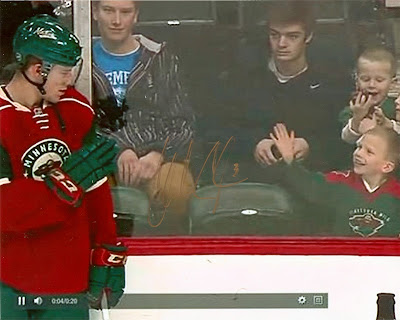 I also got another 8x10 signed by Coyle, which I purchased from the AME. It really shows what I love about signed hockey photos when you see how much that blue in pops out of the photo when signed on the ice surface. 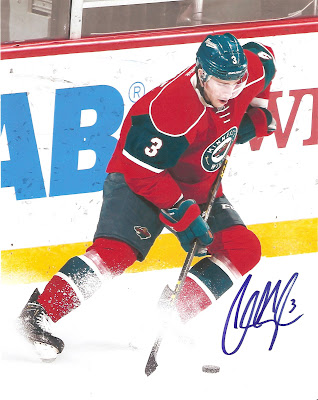 Lastly, I also got three cards signed. I had both Coyle and Scandella sign their Young Guns rookie cards, since I'm trying to accumulate as many of those and I can. I also had Scandella sign his 2010-11 Luxury Suite rookie card. I'm not collecting that set, I just thought it would look amazing when signed in blue. I was right. 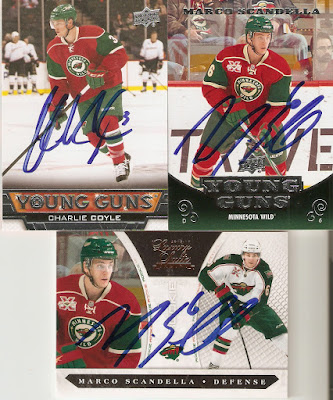 That's it for this round. Between AME and FanHQ, both places have plenty of Minnesota Wild signings, so I'm sure there will be plenty more in the future.
Posted by Matt Pederson at 5:21 PM No comments:

Here's a quick look at my TTM returns for the week ending December 3, 2016: 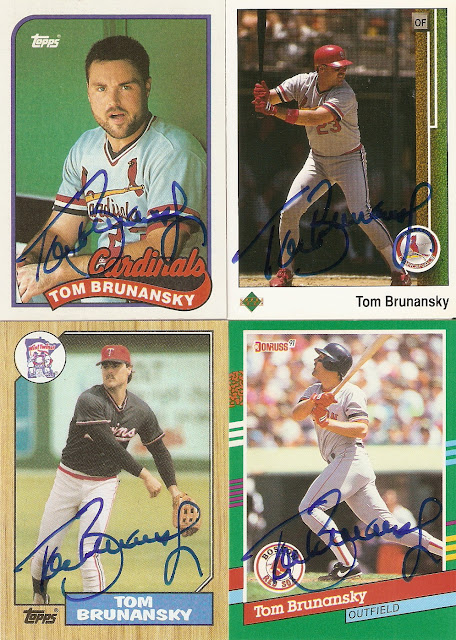 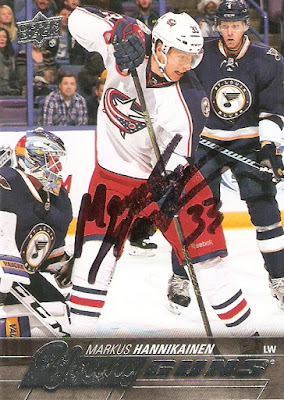 Posted by Matt Pederson at 8:51 AM No comments:

Autographs from My Weekend in Minneapolis

I had a great weekend over the Thanksgiving break. To start off, my wife and I celebrated out 10-year anniversary last Friday, the 25th, and of course, we went to a hockey game. It may be a tough sell for some to convince their wife to watch hockey on such a momentous day, but I am a die-hard Pittsburgh Penguins fan, and they were playing the Minnesota Wild on that very day. Knowing how important the once-per-year game is to me, she graciously agreed to go, and not only that, was actually looking forward to it.

We made the three-and-a-half-hour trip from Moorhead, MN to the Twin Cities, and met up with my cousin and a few friends, all proudly wearing the black and gold. We had a great time and enjoyed the event, but man, the Penguins were having an off day, and lost 6-2. 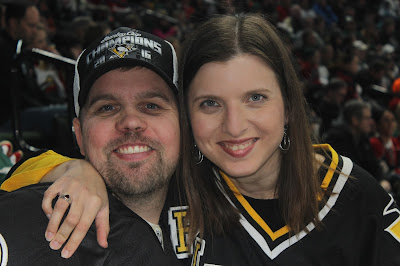 We stayed the night at my cousin's place in St. Paul, and the next day, she wanted to get some shopping done, so off we went. There are a number of malls in the Minneapolis/St. Paul area, many of which have sports memorabilia stores that host autograph signings. As luck would have it, there was a hockey one that very day, which meant that was the mall we would be heading to.

AME Sports just opened a new location at the Burnsville Center, which is just south of Minneapolis, and was hosting 1980 Olympic Hockey Team members Neal Broten and Buzz Schneider. 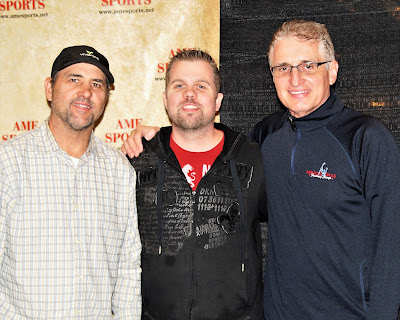 I was able to add Schneider to a 16x20 of the "Miracle on Ice" celebration that I got signed by Broten at an autograph signing two years ago. Schneider was part of the "Conehead" line with Mark Pavelich and John Harrington that would become the top scoring line of the 1980 Olympic Games. Of course, with the recent passing of Bob Suter, this is a project that will be impossible to finish, but it will still be fun to get as many as I can. 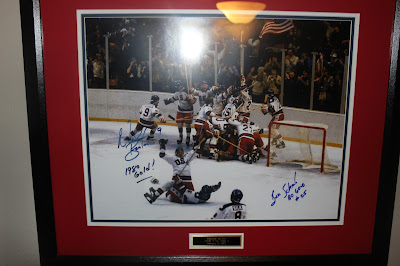 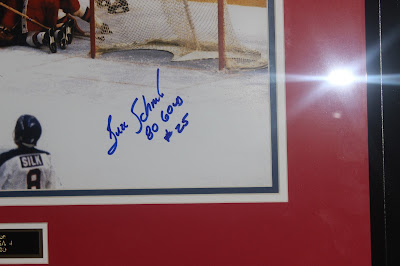 I already have Broten's autograph on a few items, including the main one above, but I still wanted to get something, so I found this really nice 8x10 collage featuring some of his notable career accomplishments, like the 1980 Olympic Gold Medal and 1995 Stanley Cup. He also won the NCAA Championship with the University of Minnesota Golden Gophers in 1979, and is only one of two players (Ed Belfour is the other) to win all three championships. 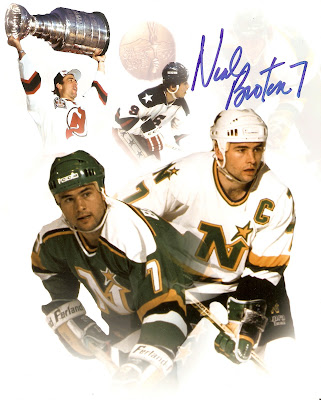 AME's Black Friday deals extended throughout the weekend, and one of their promotions was that with any $50 purchase, you would be put into a drawing for a free autographed item. Little detail was given apart from that, but being just $10 short of the mark, I figured I'd try and find something, just to see what happens. I ended up finding a Scott Stahoviak autographed baseball on clearance for $15, which was perfect. Stahoviak spent parts of five seasons in the majors, with his most notable being in 1996, when he played in 130 games, hitting .284, with 13 home runs and 61 RBIs. 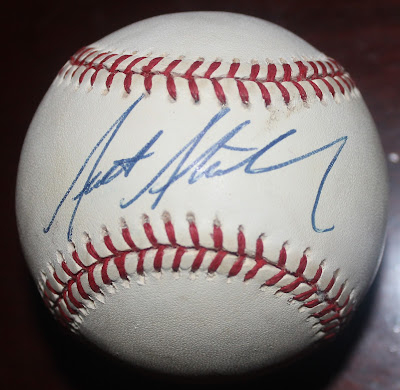 Lastly was an item I almost didn't find, but I'm really glad I did. While I was waiting for my wife to finish shopping, I was browsing through their card binders. They had various items, from base cards, to memorabilia cards, to certified autographed cards, and even some in-person autographed cards from signings they have conducted in the past. I was looking to see if just maybe they'd have a signed card or two from a set that I'm working on, and sure enough, I found one, with this 2014-15 Ultra Erik Haula card. Luck was on my side, too, as I just missed sending this very card in to the signing they hosted just three weeks ago. Well, instead of spending $20 on the signing fee for the event, I managed to pick this one up for just $3! 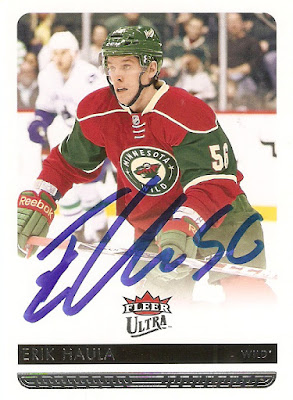 That's it for this weekend's ink. I had a great day Friday, and another amazing day Saturday. Now, it's time to get back to reality, until another game or special event brings me back to the Twin Cities.
Posted by Matt Pederson at 11:49 AM No comments: