Real quick, this is simply just a puck I found on Ebay at a really good price. usually, I like to get the Official Game Pucks signed, but if the right deal comes along, I have no problem accepting a signature on an autograph puck. For just $15+shipping, this Beau Bennett puck is now mine. 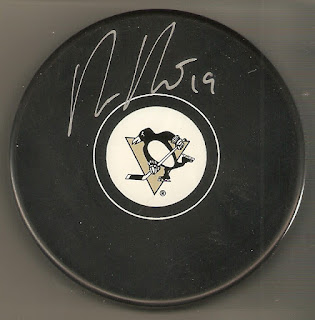 Posted by Matt Pederson at 2:31 PM No comments:

One of the sports memorabilia companies in Minnesota I have done business with the longest is AME Sports. They are great about hosting a number of autograph signings throughout the hockey season, and although they don't always get the biggest names in, their prices are always cheap. One of their most recent signings took place during the NHL pre-season, and they brought in Wild defense prospect Mike Reilly, who signed an Official Game Puck that I sent in. 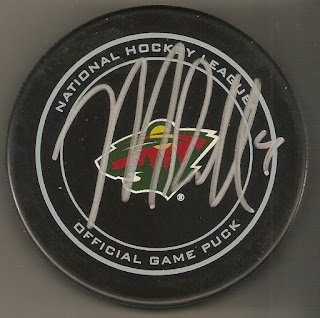 Reilly didn't make the regular season roster, but is working hard to get the call-up. He is currently the third highest scorer on the Iowa Wild, and the top-scoring defenseman. He grew up in the Minneapolis suburb of Chanhassen and played his college hockey at the University of Minnesota, so he has an entire city really pulling for his to make it. If he keeps going on the momentum he has built, I'm sure it'll only be a matter of time.
Posted by Matt Pederson at 8:45 PM No comments:

Leland Irving was the only return for the week ending November 14, 2015, and a quick one, taking just 11 days c/o the Iowa Wild 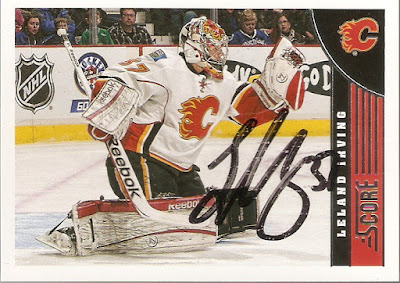 Posted by Matt Pederson at 11:02 AM No comments:

One of my favorite, and newest autographs in my collection is a helmet signed by my favorite football player, J.J. Watt. I got my hand on this through a private signing hosted by H&H Sports over the summer. 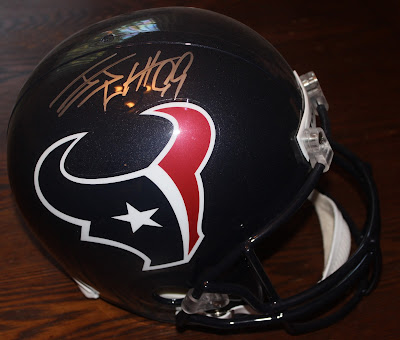 This is a full-sized helmet, and while I usually go for authentic models on most items, with football helmets, the replicas are actually much better for signing. Authentic helmets have more grooves and air holes on the top, which serve their purpose during in-game action, but the replicas have more of a classic look, with a larger surface available for the signature. Watt has a great looking signature, and even though I'm mostly a hockey guy, this piece is easily one of the cornerstones of my collection.
Posted by Matt Pederson at 2:14 PM No comments:

I got these a few months ago, and considering how awesome each of them are, I honestly have no idea why I haven't posted on them yet. Really, I have no good reason, other than just general laziness, which is weird, because I took the time way back then to scan them into the computer.

Either way, earlier this year, Total Sports Enterprises hosted an autograph signing with three Penguins players (well, two current and one former), Evgeni Malkin, Pascal Dupuis, and Phil Bourque. I'd like to say it was Malkin who brought me into it, but really, I would have participated for any of the three. Either way, I decided to order a puck from each of them, and of course, I had to have the Official Game Pucks. Here's how they look

I've never been able to pinpoint Malkin's signature. I can kind of see how the beginning might be an "E," but the rest, I have no clue on. Maybe it's his initials in the Cyrillic alphabet? I do always think it's funny when players rush through a mess of a signature, yet take the time to write out their jersey number. Still, a Malkin puck is a Malkin puck, and I'm thrilled to have it. 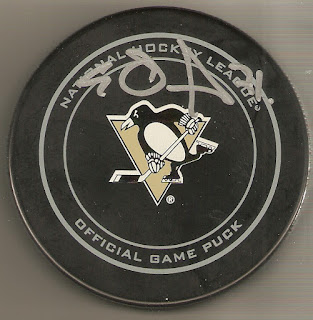 While Dupuis's signature is a bit chaotic, I love how he actually uses almost the ENTIRE puck. There's a little bit of streaking in the pen he used, most likely from moving the marker too fast, but it's still a great-looking puck. 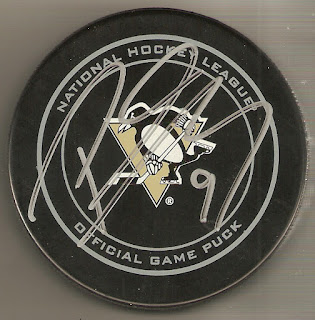 Bourque has a signature that you can almost actually read, well, the last name, at least. Like Dupuis, he used the full surface of the puck for his signature, and even included a "#" before his jersey number. Another fantastic puck. 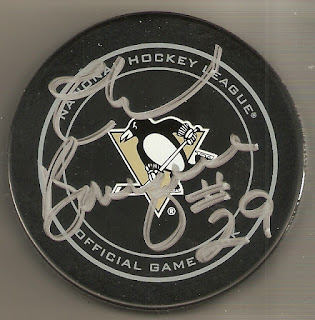 This 8x10 is of Bourque, but it wasn't actually signed at this particular signing. TSE had these from a previous signing at a really good price, so I figured, why not? The signature is placed perfectly on the available space of the ice surface, and it even included an inscription recognizing the two Stanley Cups he won with Pittsburgh in 1991 and 1992. 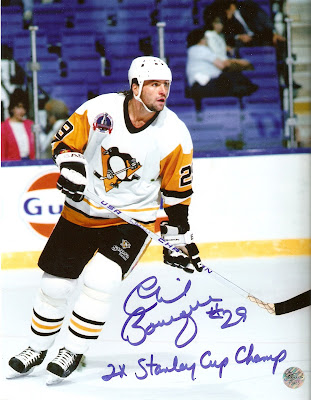 I'm very happy with each of the items I got from these three players. They all look great, and I will say that TSE did a great job of handling the items and getting them to me safely. Most of their upcoming signings are of Pittsburgh Steelers players, but I will definitely be keeping my eye open for the next time they bring any more Penguins in.
Posted by Matt Pederson at 1:46 PM No comments:

Autographs from a Few Private Signings

Living right one MN/ND border, I don't live in an area that commonly has many autograph opportunities. Minneapolis has plenty, but it's still a four-hour drive away. Luckily, my good friend Darrell runs Halkman Sports, which hosts plenty of private autograph signings, and I've taken part in quite a bit of them over the past few months. Here's what I was able go get my hands on, exclusively through Halkman Sports. 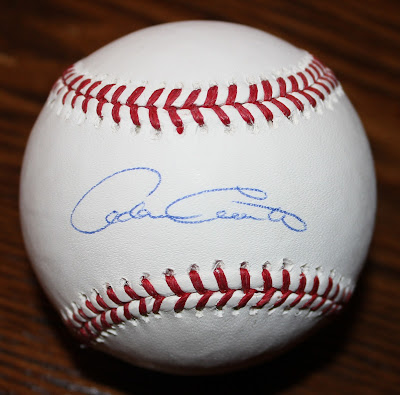 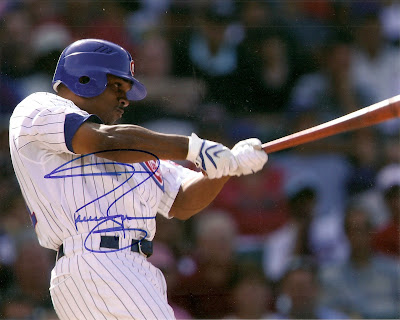 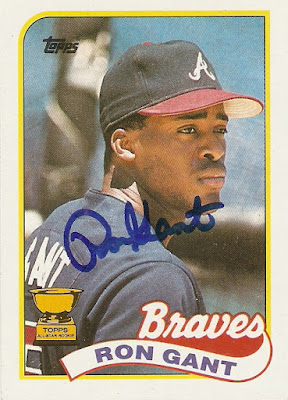 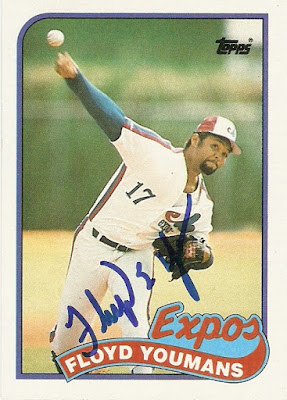 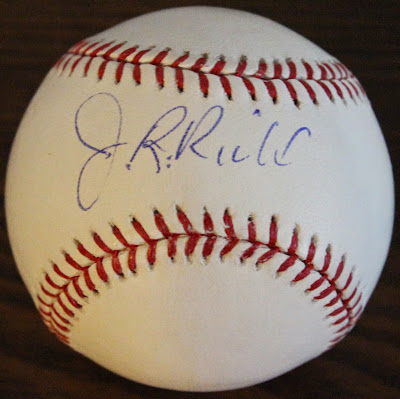 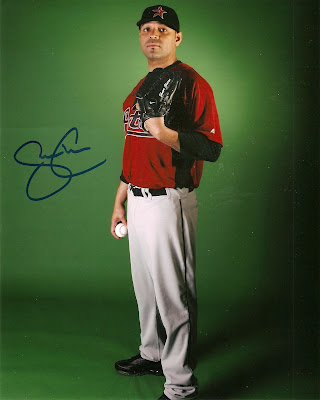 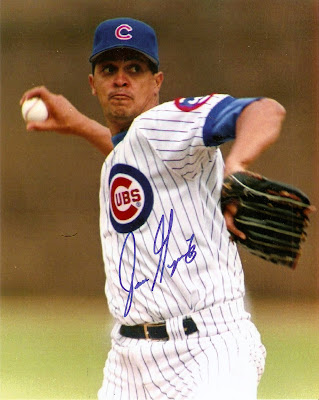 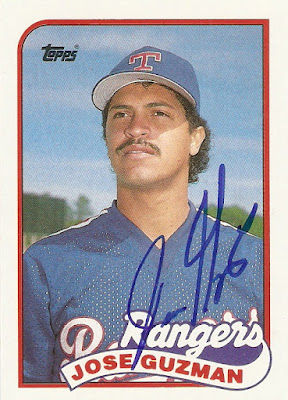 Darrell usually tries to do a couple every month and has upcoming signings scheduled with Scott Erickson, Daryle Ward, Doug Mientkiewicz, and Ron Gant. If anyone is interested in taking part, visit the website at www.halkmansports.com.
Posted by Matt Pederson at 3:03 PM No comments:

The nice thing about being a Minnesota sports fan is the sheer number of autograph opportunities available. Not only are there the usual promotional appearances that teams make their players do, but there are three different sports memorabilia companies in the Minneapolis/St. Paul area that regularly host paid signings with the players. The newest one on the market, Crave Sports Company, hosted a signing with Minnesota Wild left winger Thomas Vanek. I wasn't able to make it in person, but they make it very easy for those from far away to be able to get anything they need, so naturally I ordered an Official Game Puck to be signed. 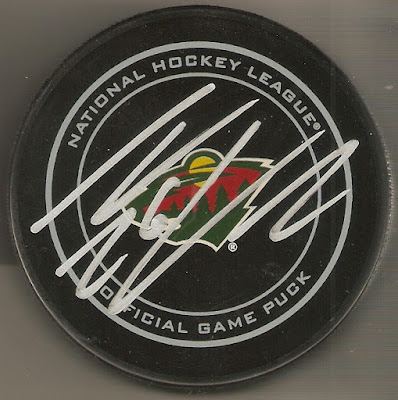 This is actually the second time this year that I got Vanek's signature. Over the summer, I got four cards signed by him through the mail. I know he wasn't always a great TTM signer, but lately, he has really been great to his fans through that outlet. Realistically, I probably could have sent him the puck through the mail and got it signed for free, but really, if a player is willing to be as good to his fans like he is, I have no problem at all paying for one every now and then.
Posted by Matt Pederson at 5:02 PM 1 comment:

Here's a quick look at the TTM returns I received back for the week ending November 7, 2015 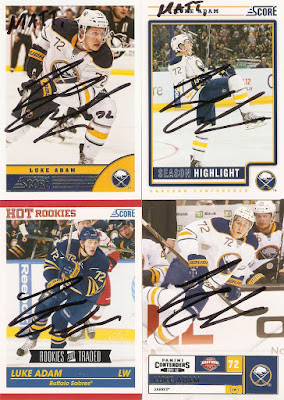 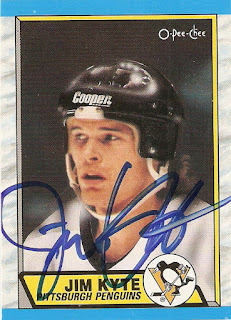 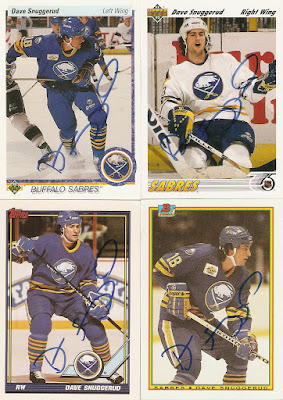 Posted by Matt Pederson at 7:57 PM No comments:

I just got one TTM back this week, but that is to be expected. With the new season starting, I have begun sending requests to current players through their team, with takes a much longer turnaround than when you can send to a retired player's house, who may not get as much mail as he did during his playing days. I got one back this week from Justin Abdelkader of the Detroit Red Wings. I sent him one card last season to his home address, which he signed in black marker. The turnaround took 262 days. 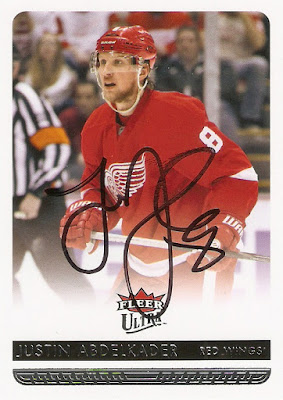 Posted by Matt Pederson at 7:25 PM No comments:

Getting Caught Up On My TTM Returns

Seeing as though it's been a while since I've posted my TTM returns, here's a quick look at what I've gotten back over the past month or so: 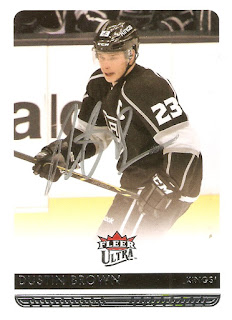 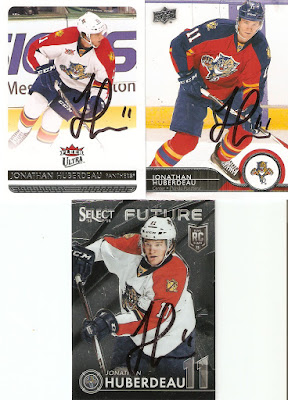 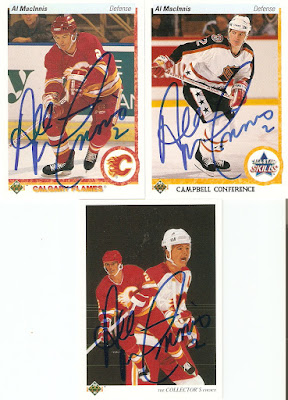 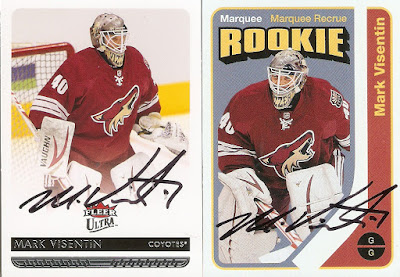 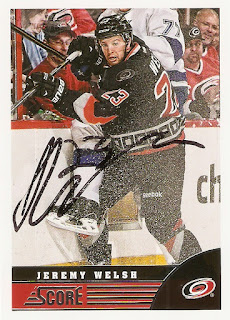 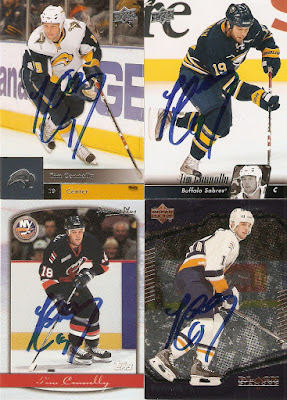 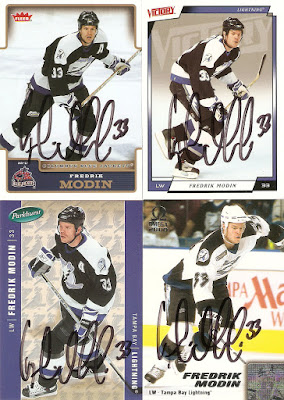 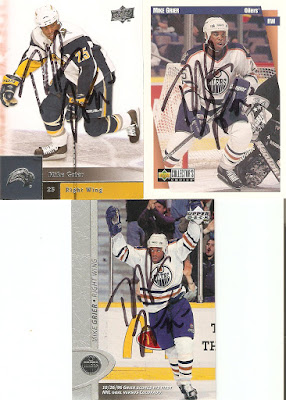 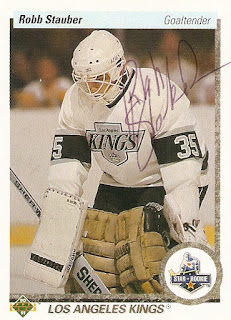