To follow up to my last post, there was one more that I had, and wanted to give it a post all to itself, and here it is: a signed 8x10 of Bill Mazeroski, from TSE. 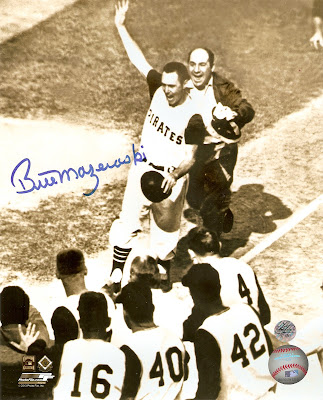 For me, as great of a game as baseball is, just on its own merits, the game is also about the moments. This one harkens back to the 1960 World Series between the Pittsburgh Pirates and New York Yankees. Mazeroski's Game 7 home run still stands as the only Game 7 Walk-Off Home Run in Major League history, and the moment was captured in this photo, signed beautifully in blue ink. Mazeroski was inducted to the Baseball Hall of Fame in 2001, and I'm sure I'll get my hands on a signed ball soon enough, but for now, this photo will sit proudly in my collection.
Posted by Matt Pederson at 10:33 AM