Pretty Much the Coolest Bobblehead Ever

I'm not much of a bobblehead collector, at all. Of the three I had up until today, all three were acquired as a free giveaway at a baseball or a hockey game. I understand the appeal of them, but it was just never a route that I ever took in pursuing a collection. However, the fine folks at FanHQ ended up convincing me to open my wallet for a bobblehead for the first time ever.

This past winter, they decided to immortalize, in bobblehead form, an iconic image of former Minnesota Twins manager Tom Kelly that depicts him using a pitching machine in the Metrodome, also while wearing Zubaz, and also while smoking a cigar. 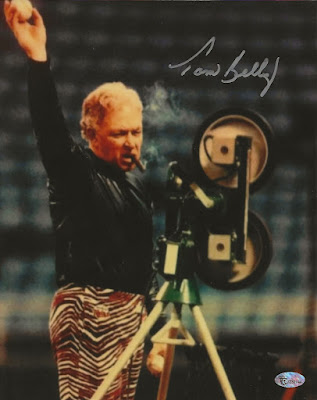 The image was incredibly popular for FanHQ whenever Kelly did a signing with them, as the novelty of the elements contained combined with the absurdity of it, when being looked at through the lense of 2021, drew the attention of collectors. Of course, I had to pick up an 8x10 (pictured above), but, man, the idea of such a novelty being transformed in to a bobblehead was too good to pass up.

FanHQ stared taking preorders back in December, and as soon as I could. Since it was a preorder, so I knew there would be a wait for these to first, be produced, and second, arranged for them to be signed, but sure enough, they made their way to Kelly to sign earlier this month, and made its way to my doorstep today! 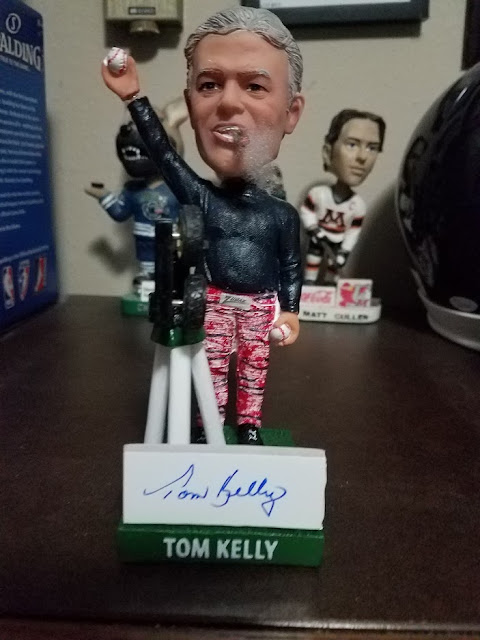 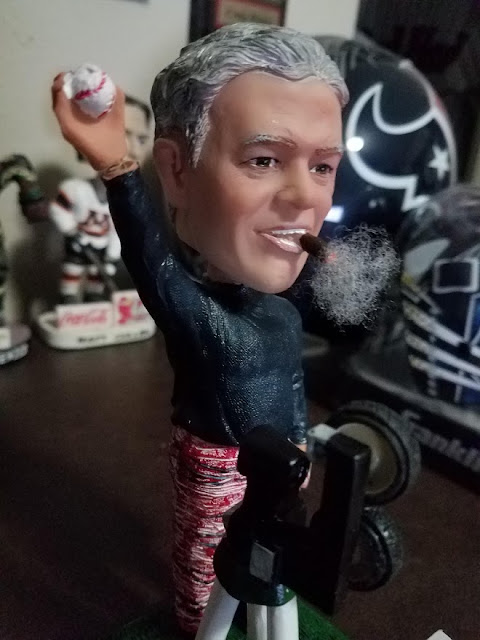 What I was really impressed with here was the sheer attention to detail. I can only imagine the amount of work that went into recreating the multi-colored crazy-striped look of the Zubaz pants that were popularized in the early 90s. The giant-sized head has the typical spring-loaded, bobble, complete with cigar, plus a light, cottony material to resemble the smoke. They also recreated the pitching machine in true-to-form detail, and included movable parts, with rotating wheels. Lastly, is the addition of the "bobblehand." Not only does his head move, but his right hand holding the baseball in the air has a small spring attached to it, giving it just a little extra movement. 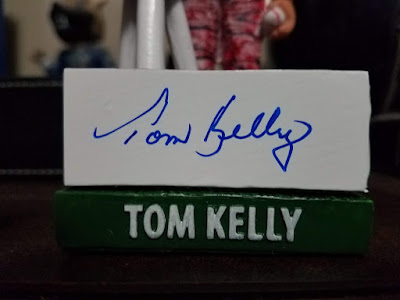 The nice thing about when these items are designed by fellow collectors, is not only that extra attention to detail that I mentioned, but the available space for ink. While many people enjoy getting a signed bobblehead, many of them have to be signed in a less-than-optimal spot, like my Matt Cullen that had to be signed on its back. FanHQ was smart with this one, in that they created a placard for the front with the Zubaz logo that could be reversed to a blank white surface that would prominently and boldly display a signature. Tom Kelly has a great-looking signature, and I'm happy that this was done in blue, to make it stand out even more.